Official Standard of the Standard Schnauzer

The Standard Schnauzer is a robust, heavy-set dog, sturdily built with good muscle and plenty of bone; square-built in proportion of body length to height. His rugged build and dense harsh coat are accentuated by the hallmark of the breed, the arched eyebrows and the bristly mustache and whiskers. Faults - Any deviation that detracts from the Standard Schnauzer's desired general appearance of a robust, active, square-built, wire-coated dog. Any deviation from the specifications in the Standard is to be considered a fault and should be penalized in proportion to the extent of the deviation. 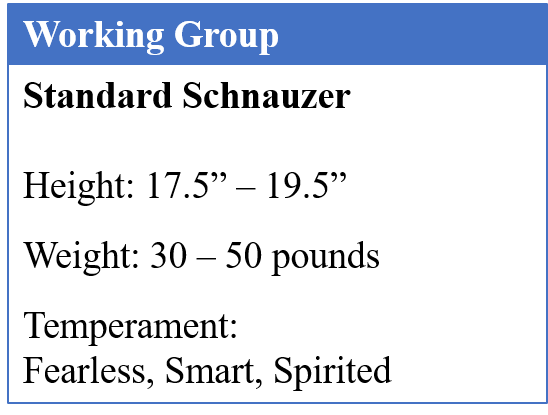 Head strong, rectangular, and elongated; narrowing slightly from the ears to the eyes and again to the tip of the nose. The total length of the head is about one half the length of the back measured from the withers to the set-on of the tail. The head matches the sex and substance of the dog. Expression alert, highly intelligent, spirited. Eyes medium size; dark brown; oval in shape and turned forward; neither round nor protruding. The brow is arched and wiry, but vision is not impaired nor eyes hidden by too long an eyebrow. Ears set high, evenly shaped with moderate thickness of leather and carried erect when cropped. If uncropped, they are of medium size, V-shaped and mobile so that they break at skull level and are carried forward with the inner edge close to the cheek. Faults - Prick, or hound ears. Skull ( Occiput to Stop ) moderately broad between the ears with the width of the skull not exceeding two thirds the length of the skull. The skull must be flat; neither domed nor bumpy; skin unwrinkled. There is a slight stop which is accentuated by the wiry brows. Muzzle strong, and both parallel and equal in length to the topskull; it ends in a moderately blunt wedge with wiry whiskers accenting the rectangular shape of the head. The topline of the muzzle is parallel with the topline of the skull. Nose is large, black and full. The lips should be black, tight and not overlapping. Cheeks - Well developed chewing muscles, but not so much that "cheekiness" disturbs the rectangular head form. Bite - A full complement of white teeth, with a strong, sound scissors bite. The canine teeth are strong and well developed with the upper incisors slightly overlapping and engaging the lower. The upper and lower jaws are powerful and neither overshot nor undershot. Faults - A level bite is considered undesirable but a lesser fault than an overshot or undershot mouth.

Neck strong, of moderate thickness and length, elegantly arched and blending cleanly into the shoulders. The skin is tight, fitting closely to the dry throat with no wrinkles or dewlaps. The topline of the back should not be absolutely horizontal, but should have a slightly descending slope from the first vertebra of the withers to the faintly curved croup and set-on of the tail. Back strong, firm, straight and short. Loin well developed, with the distance from the last rib to the hips as short as possible. Body compact, strong, short-coupled and substantial so as to permit great flexibility and agility. Faults - Too slender or shelly; too bulky or coarse. Chest of medium width with well sprung ribs, and if it could be seen in cross section would be oval. The breastbone is plainly discernible. The brisket must descend at least to the elbows and ascend gradually to the rear with the belly moderately drawn up. Fault - Excessive tuck-up. Croup full and slightly rounded.

Tail set moderately high and carried erect. It is docked to not less than one inch nor more than two inches. Fault-Squirrel tail.

Shoulders - The sloping shoulder blades are strongly muscled, yet flat and well laid back so that the rounded upper ends are in a nearly vertical line above the elbows. They slope well forward to the point where they join the upper arm, forming as nearly as possible a right angle when seen from the side. Such an angulation permits the maximum forward extension of the forelegs without binding or effort. Forelegs straight, vertical, and without any curvature when seen from all sides; set moderately far apart; with heavy bone; elbows set close to the body and pointing directly to the rear. Dewclaws on the forelegs may be removed. Feet small and compact, round with thick pads and strong black nails. The toes are well closed and arched (cat's paws) and pointing straight ahead.

Strongly muscled, in balance with the forequarters, never appearing higher than the shoulders. Thighs broad with well bent stifles. The second thigh, from knee to hock, is approximately parallel with an extension of the upper neck line. The legs, from the clearly defined hock joint to the feet, are short and perpendicular to the ground and, when viewed from the rear, are parallel to each other. Dewclaws, if any, on the hind legs are generally removed. Feet as in front.

Tight, hard, wiry and as thick as possible, composed of a soft, close undercoat and a harsh outer coat which, when seen against the grain, stands up off the back, lying neither smooth nor flat. The outer coat (body coat) is trimmed (by plucking) only to accent the body outline. As coat texture is of the greatest importance, a dog may be considered in show coat with back hair measuring from 3/4 to 2 inches in length. Coat on the ears, head, neck, chest, belly and under the tail may be closely trimmed to give the desired typical appearance of the breed. On the muzzle and over the eyes the coat lengthens to form the beard and eyebrows; the hair on the legs is longer than that on the body. These "furnishings" should be of harsh texture and should not be so profuse as to detract from the neat appearance or working capabilities of the dog. Faults - Soft, smooth, curly, wavy or shaggy; too long or too short; too sparse or lacking undercoat; excessive furnishings; lack of furnishings.

Pepper and salt or pure black.

Pepper and Salt-The typical pepper and salt color of the topcoat results from the combination of black and white hairs, and white hairs banded with black. Acceptable are all shades of pepper and salt and dark iron gray to silver gray. Ideally, pepper and salt Standard Schnauzers have a gray undercoat, but a tan or fawn undercoat is not to be penalized. It is desirable to have a darker facial mask that harmonizes with the particular shade of coat color. Also, in pepper and salt dogs, the pepper and salt mixture may fade out to light gray or silver white in the eyebrows, whiskers, cheeks, under throat, across chest, under tail, leg furnishings, under body, and inside legs.

Black-Ideally the black Standard Schnauzer should be a true rich color, free from any fading or discoloration or any admixture of gray or tan hairs. The undercoat should also be solid black. However, increased age or continued exposure to the sun may cause a certain amount of fading and burning. A small white smudge on the chest is not a fault. Loss of color as a result of scars from cuts and bites is not a fault. Faults - Any colors other than specified, and any shadings or mixtures thereof in the topcoat such as rust, brown, red, yellow or tan; absence of peppering; spotting or striping; a black streak down the back; or a black saddle without typical salt and pepper coloring-and gray hairs in the coat of a black; in blacks, any undercoat color other than black.

Sound, strong, quick, free, true and level gait with powerful, well angulated hindquarters that reach out and cover ground. The forelegs reach out in a stride balancing that of the hindquarters. At a trot, the back remains firm and level, without swaying, rolling or roaching. When viewed from the rear, the feet, though they may appear to travel close when trotting, must not cross or strike. Increased speed causes feet to converge toward the center line of gravity. Faults - Crabbing or weaving; paddling, rolling, swaying; short, choppy, stiff, stilted rear action; front legs that throw out or in (East and West movers); hackney gait, crossing over, or striking in front or rear.

The Standard Schnauzer has highly developed senses, intelligence, aptitude for training, fearlessness, endurance and resistance against weather and illness. His nature combines high-spirited temperament with extreme reliability. Faults - Any deviation from the specifications in the Standard is to be considered a fault and should be penalized in proportion to the extent of the deviation. In weighing the seriousness of a fault, greatest consideration should be given to deviation from the desired alert, highly intelligent, spirited, reliable character of the Standard Schnauzer, and secondly to any deviation that detracts from the Standard Schnauzer's desired general appearance of a robust, active, square-built, wire coated dog. Dogs that are shy or appear to be highly nervous should be seriously faulted and dismissed from the ring. Vicious dogs shall be disqualified.